Yesterday seen the launch of the much anticipated Vault Tec Workshop, the 5th instalment of Bethesda’s downloadable content (DLC) for the Fallout 4 Series. The DLC starts out in the south Boston area in Quincy Quarry. After killing a few raiders and wandering deeper into the stonework, you find yourself in the tunnel entrance to what is known as Vault 88. The quests involved with this DLC are quite good, blast a few ghouls here, make a few holes there. Finally, finding the one person involved and left in Vault 88, she guides you on a journey of building you very own first official Vault Tec vault.

What an amazing experience, the DLC is unlike any of the previous content released by Bethesda. There was some delays in receive access to the content for some PS4 users (speaking from experience) and I believe that Bethesda is still troubleshooting the issue for those citizens of the UK and EU. If you find that you are still having trouble finding or even installing the Vault Tec Workshop, you can visit this website which give a good guide on how to combat the issue. 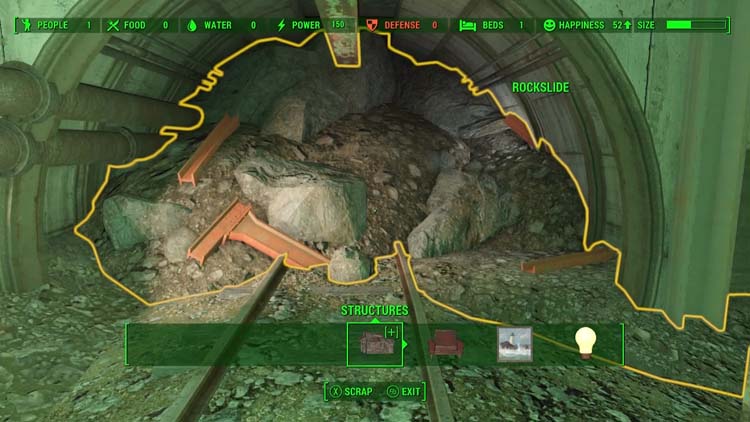 No with all the fluff out of the way, let me just say that Bethesda has done a great job creating this DLC. Their hard work shows in the quality of their quests and the workshop includes some much anticipated and cool new items. The design work however, does not come without its flaws. After about an hour into vault building I found myself getting frustrated with clipping objects not to mention those awful vault atrium railings of which for my own sanctity, I will avoid the subject all together. This is likely more of a stressor for consoles oppose to PC, yet I imagine they will have their own issues. What I did find great was the amount of material immediately available to scrap. Building a vault is no easy feat, with lack of materials it can be really frustrating to have to go out into the wasteland to find every tin can, toothbrush, and metal pot just to build a few walls. Bethesda thought of this and put ample amounts of material at our finger tips to leave no short supply for building our wonderful creations.

Now I won’t go into detail for spoiler reasons on the cool new items, suffice it to say the items that they have added will revolutionize the way people play fallout. That said, I have yet to confirm that the items will be available outside Vault 88 and if they are, we can expect a whole new level of settlement building. However, unrealistic it would be to create a cavern as large as the one in Vault 88, I’m glad Bethesda skimped on the realism of placing support beams as I imagine this would have created a lot of grief.

The experiment on vault dwellers is another aspect that will capture gamers worldwide. Although I have not yet had a chance to begin testing, I am eager to see if Roger in the mess hall is going to end up growing that third nipple or if Tina will develop super human strength. As a scientist and researcher, this is the concept of this new DLC that intrigues me the most. I’m very excited to see how this will develop as I play the game further and am curious to see how the Fallout community will perceive human research and if this DLC will play a role in its perceptions in younger generations. The one thing that I wish we were able to do is to name our vault dwellers. This is something that we could possibly see in a patch or update in the future. Although it is unethical conduct in research to name your test subjects but in this instance, it would be extremely convenient to keep track of everyone. This is something that we have seen in the Fallout Shelter series and if Bethesda follows suit with that as they usually do, I’m guessing that this is something that we can expect to see in the future.

All in all this is by far the best DLC  released to date and Bethesda has truly out done themselves. I’m sure that there will be more issues that pop up as people work with this content more and often times will get criticized by gamers too young to understand the complexity of something of this caliber. As a seasoned gamer, I can truly say that I appreciate this DLC and all of the work that Bethesda has put into it. The ease and flow of workshop items and vault underground layout speaks volumes to the amount of planning and development that was involved in this. There is a part of me that after now seeing the bar raised this high, I would expect to see the same quality in content in the Nuka World DLC. There really is no doubt in my mind that we will be disappointed by the last and final instalment of the Fallout 4 DLC packs, or will we?

One thought on “Vault Tec Calling! A Review of Vault Tec Workshop”